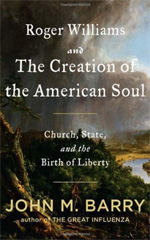 I have just finished reading John Barry’s remarkable book about Roger Williams, the American Soul, and religious liberty. It was difficult to put it down. My esteem for Williams, already huge, is now immense. The attached review by a Rhode Island church historian is positive but less so than the book deserves. However, it is better than the ones I have seen in major newspapers. Roger Williams’ work on behalf of separation of church and state has timeless relevance, but it is also timely in the world right now. His rivals in early New England days, chiefly John Winthrop and his vision of a city set on a hill, saw the separation of church and state as very much the opposite of what they envisioned. They made Williams suffer harshly for his views and might have killed him. Williams’ views are also relevant to current views of Islam and other religions. In Norway, four hundred years after Roger Williams, the state is still the nursing father (or mother) of the church, and the clergy of the state church is salaried by the government. I highly recommend this book.

Book Review
John M. Barry’s “Roger Williams and the Creation of the American Soul: Church, State and the Birth of Liberty”

John Barry has written one of the best and clearest books about Roger Williams that I have ever read, a book about the ideas of Roger Williams and their context. It is not a biography in the usual sense, but it tells what ideas, forces, and events shaped Williams’ thinking. Barry concludes that Williams was truly revolutionary and was the source of one of two major versions in the American “soul.” He was the fountain of the stream of religious freedom, separation of church and state, and political liberty. The other stream was represented by John Winthrop, the first governor of Massachusetts. Winthrop presented America as a Christian “city on a hill” whose continued success required the state to be a “nurturing father” to the church. The government and the church had to be partners in curbing the human wickedness and preserving their covenant with God. If they failed, God would surely make an example of their city, treating it as if it were Sodom or Gomorrah. Williams, on the other hand, said that the state had absolutely no role to play in religion.

Barry devotes about a third of the book to the British context of Williams’ development, especially stressing the impact of Sir Edward Coke and Sir Francis Bacon. The greater influence was Coke, who plucked the boy Williams from obscurity, made him his amanuensis, and saw that he received the finest formal education available at Charterhouse School and Cambridge University. Williams accompanied Coke to Parliament, the Court of Star Chamber, Court of Common Pleas, the Privy Council, conferences with the King, and other high-level meetings. Williams learned about the law, government, and justice first hand at the elbow of England’s greatest jurist and legal thinker.

While making a solid case for Coke’s great influence on Williams, Barry’s contention that Williams’ view of the world was formed by the scientific ideas of Sir Francis Bacon seems strained. He contends that Williams’ reliance upon evidence rather than dogma or logic resulted from his acceptance of Bacon’s experimental view of the world. But it seems that what Williams concluded about religion, the state, and humanity flowed from his interpretation of the Scriptures and his personal experiences.

His interpretations and experience led Williams to hold the most enlightened view of the Native Americans by any Englishman of his time, and it led to his revolutionary conclusion that church and state must be separated. He founded, for the first time in modern history, a totally secular state. The town government that he created in 1637, the charter that he obtained from Parliament in 1644, and the government established for Providence Plantations in 1647 were all secular entities. The enormity of this development provoked the neighboring colonies, Massachusetts, Plymouth, and Connecticut to try to dismember, over-awe, and destroy Williams’ colony. Barry observes that when Williams secured a charter to legitimize his plantation, the friendship that he had had with John Winthrop went cold and Massachusetts tried to claim Providence Plantations on the basis of a fraudulent charter.

The “wall of separation” between church and state was a metaphor from Williams 150 years before Thomas Jefferson used it. And, while there is no evidence that Jefferson ever read anything written by Williams, everyone knows how important John Locke was to Jefferson. Barry agreed with many historians that Locke knew Williams’ work, even though Williams was even more radical than Locke or John Milton in advocating religious freedom for “all men of all nations.”

A couple of minor factual errors appear. For example, Barry has the irrepressible, obstreperous Samuel Gorton coming to Newport before it has even been founded, not realizing that Gorton was one of the people who caused William Coddington and company to withdraw from Portsmouth in 1639. Elsewhere, Barry says that Roger Williams’ famous debate with Quakers in 1670 lasted two days, when, in fact, the debate lasted four excruciating days, three in Newport, one in Providence five days later.

A more important issue is applying the “Seeker” label to Williams. Barry accepts the authority of James Ernest, who wrote a major biography of Roger Williams in 1932 in which he argued that Williams was a Seeker. However, more recent scholars, such as Edmund Morgan and Edwin Gaustad, dismissed this interpretation, noting that the Seeker label was applied to Williams by his enemies. It was meant to discredit him. The Seekers were generally understood to believe in Universal Salvation and to deny the divinity of Jesus Christ, two positions that were totally anathema to Roger Williams. It is interesting to note that the last persons to be burned at the stake in England in 1612, Bartholomew Legate and Edward Wightman, were identified as Seekers, and Legate was executed close enough to where the nine-year-old Roger lived that he may have actually witnessed the burning. The bells of Williams’ parish church tolled while Legate “burned to ashes.”

Williams never accepted the label, but consistently described himself as a witness for Christianity. “Witness” is the English translation of the Greek word “martyr,” and that is exactly how Williams repeatedly described himself. One did not have to die to be a martyr, but one had to suffer, and Williams felt that he had certainly suffered for his faith. He had been driven from England, then condemned by his fellow ministers and former friends and banished from Massachusetts (and Plymouth, de facto), and forced from civil society into the wilderness. He saw himself as a “witness” to Christianity until God would send a new apostle to restore the Church. “Seeker” has come to have a positive meaning in our time, but in Williams’ time, it was a slander. One might as validly call him a “Roman Catholic” as to call him a “Seeker,” but everyone would recognize that as being absurd.

Originally Barry had intended to write about Billy Sunday, the popular Fundamentalist evangelist of the early 20th century, but that led him back to the 17th century and Roger Williams. He concludes that the division between Winthrop and Williams is still here and that the two represent divergent understandings of the American soul. The debate that Roger Williams had in the 1640s with John Winthrop and the champion of the Massachusetts way, John Cotton, still rages on in the 21st century. The Religious Right and those who maintain that the United States was founded as a Christian nation articulate the same position that John Winthrop and John Cotton made in the 17th century.

The late Peter Marshall, Jr., wrote three books trying to make the case that the United States was founded as a Christian nation and to call Americans back to their “Christian and biblical heritage.”  One of these books, The Light and the Glory, written in 1977, argued that God had a plan for America, beginning with Columbus in 1492. But, Marshall identified two villains who damaged God’s plan for America: Roger Williams and Thomas Jefferson.

In many ways, Roger Williams is a greater problem for Fundamentalists because he was a devout Christian minister, a profound Biblicist whose ideas flowed from his interpretation of the Bible. And Williams demolished the arguments of those who would argue that God favored the nurturing father-state or even that there was any such thing as a “Christian nation.”  Williams’ profound analysis and conclusion of these matters has made him especially attractive to those concerned about the rise of the Religious Right, Christian Reconstructionists, and those who think that the United States is God’s new Israel.